A partnership between saxophonists Kenneth Radnofsky and Michael Couper, RCEditions was founded to provide members of the saxophone community (both classical and jazz), with high quality music and recordings, and enriching pedagogical materials. RCEditions brings together adaptations of masterworks by major composers (Rachmaninoff and Chopin Cello Sonatas, for example) along with exciting contemporary works, many of which were commissioned by Mr. Radnofsky or Dr. Couper, as well as other leaders in the saxophone community, including the PRISM quartet.

The careers of Messrs. Radnofsky and Couper have intersected with many talented composers, resulting in commissions and performances that RCEditions is proud to offer as part of its catalog. Patrons may expect the catalog to develop continuously as we add works by emerging as well as established composers.

RCEditions is unique in its endeavor to transcribe, arrange and meticulously edit grand and large-scale works by major composers such Chopin, Rachmaninoff, Schubert, Beethoven, and Bach. These adaptations have been produced by Mr. Radnofsky and Dr. Couper or in collaboration with other editors, including saxophonists Chien-Kwan Lin and Todd Rewoldt, and pianist Yoshiko Kline. Saxophonists may now learn from the study of historically-significant works as well as diversifying their performances with time proven masterpieces.

Welcome, and thank you for visiting!

Here is some background on our company and mission, as well as some general direction regarding the features of our catalog...

RadnofskyCouperEDITIONS first began as Ken and I realized that not only did we have a common interest in new music, but also in the transcription of large-scale and masterful works by some of the greatest composers in the Western canon, many of which were previously unavailable to the modern saxophonist, representing a tremendously important and influential aesthetic in classical music. Many of the works included in RCEditions' catalog are essential repertoire for the instruments from which they are adapted (i.e. the Chopin Cello Sonata). This grants the student the advantage of collaborating with other musicians who specialize in the relevant period, and the ability to gain perspectives from teachers of other instrument families.

Approaching music from an unfamiliar genre can be a daunting task. All of our editions are meticulously edited, endeavoring to preserve and notate the composer's original intentions as much as possible, but in some cases offering suggestions in potentially contentious passages. For example, in Bach's popular Partita (BWV 1013) articulations and ornaments are offered as a starting point, and are notated in a soft gray so as not to be visually distracting and to allow the performer to make their own modifications and personal touches.

Of course the saxophone is extensively involved in the performance and creation of new music, and so our catalog includes an ever-increasing collection of works, “Music of Our Time,” many of which are born of the career-long contributions of Ken Radnofsky in the commissioning and premiering of great new works for saxophone. Musical influences include among others, Modernism, Jazz, and Latin American folk music, and are represented by an array of composers from countries all over the globe. Of particular note are the innovative works for saxophone and electronics by Joseph Waters, which fuse classical and pop styles to create energetic and sensational works appealing to audiences of all backgrounds.

Sample recordings, downloadable mp3s, and videos are available for nearly every work in the catalog to aid in both shopping and rehearsing.

RCEditions has been fortunate to work and interact with wonderful artists and educators, several of whom have created exciting pedagogical materials for amateur and professional saxophonists alike. Dr. Todd Rewoldt authored a book for the study of Altissimo, recently reviewed in Saxophone Journal, which uniquely provides contextual fingerings for a variety of extended-range scales, arpeggios, trills, and selected passages from the repertoire. A brilliant Jazz method by Jason Goldman offers a systematic approach toward the study of improvisation, beneficial for student improvisers of all levels, College Jazz majors, and classical saxophonists looking to crossover with satisfying results.

We hope that you enjoy all we have to offer. We welcome any questions or comments, and are always available to help. Please visit us again soon! We are constantly adding works and materials.

If you haven't already, we invite you to like us on Facebook, to help us spread the word, and keep posted on new additions to our catalog and special promotions! 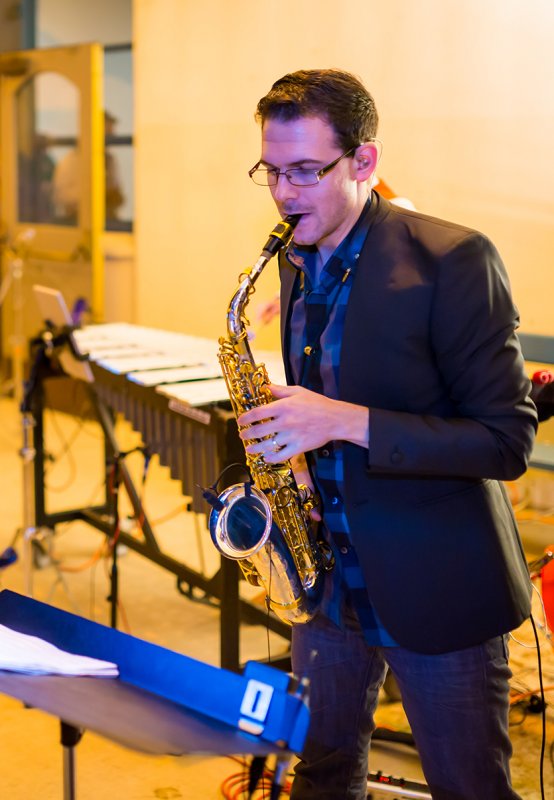 Hailed by the New York Times for his “sweet intensity” and “insinuating smoothness,” Michael Couper is active in the advancement of the saxophone repertoire to include music of our time, traditional music reinterpreted, and innovations in pop styles. Dr. Couper was a finalist for the 2015 Concert Artists Guild Victor Elmaleh Competition, a rare distinction among saxophone soloists. He is also a founding member of the critically-acclaimed Mimesis Ensemble, a group based in New York City that is dedicated to presenting works of poignant cultural significance, largely by living composers. As a soloist and chamber musician, he has performed internationally at major venues including the Seoul Arts Center, Miller Theater, Merkin Hall, and Carnegie Hall, among others. Under the pseudonym “Shrodinger's Sax,” Couper plays soprano saxophone with the musically acrobatic and genre-defying band SWARMIUS, described as a “sonic fusion of hip-hop and house-lounge-techno meets modern-classical.” He has performed concerti with the USC Thornton Symphony, the San Diego State University (SDSU) Symphony Orchestra, the SDSU Wind Ensemble, and the Swarmaphonic Orchestra, and is engaged in several new concerto projects for the 2016/2017 season, including one with Mohammed Fairouz. Partnering with saxophonist Kenneth Radnofsky, Dr. Couper co-founded a music publishing company, RCEditions (www.rceditions.com) that endeavors to enrich the repertoire of the modern saxophonist, offering as part of its catalog adaptations of historical masterworks as well as exciting new commissions.

Dr. Couper plays with the San Diego Symphony, and has also performed with the Tanglewood Festival of Contemporary Music, the San Diego Opera, and the Vermont Symphony Orchestra, as well as several local orchestras in the Los Angeles area. He has given guest artist recitals and masterclasses at universities and conservatories around the country, including New England Conservatory, the Longy School of Music, Boston University, CSU Sacramento, and CSU Long Beach, among others. He is an active teacher and performer in the community, with recent faculty appointments at San Diego State University and CSU San Bernardino, and summer festivals including CSU Summer Arts, and the California State Summer School for the Arts. In November of 2011, he collaborated on a Grammy-nominated disc of chamber works on the Sono Luminous label, and has subsequently recorded with SWARMIUS and for the LA Operetta Foundation.

Dr. Couper earned his Doctorate of Musical Arts with distinction from the University of Southern California, his Master of Music from New England Conservatory, and his Bachelor of Music from San Diego State University, where he was the outstanding graduate for the School of Music, and the recipient of the Outstanding Alumni Award. His past teachers include Todd Rewoldt, Kenneth Radnofsky, James Rötter, and Douglas Masek for saxophone, Frank Ticheli, Malcolm Peyton, and Brent Dutton for composition, and Lucinda Carver and Larry Livingston for conducting. Dr. Couper is a Conn-Selmer Artist endorsing Yanagisawa saxophones. 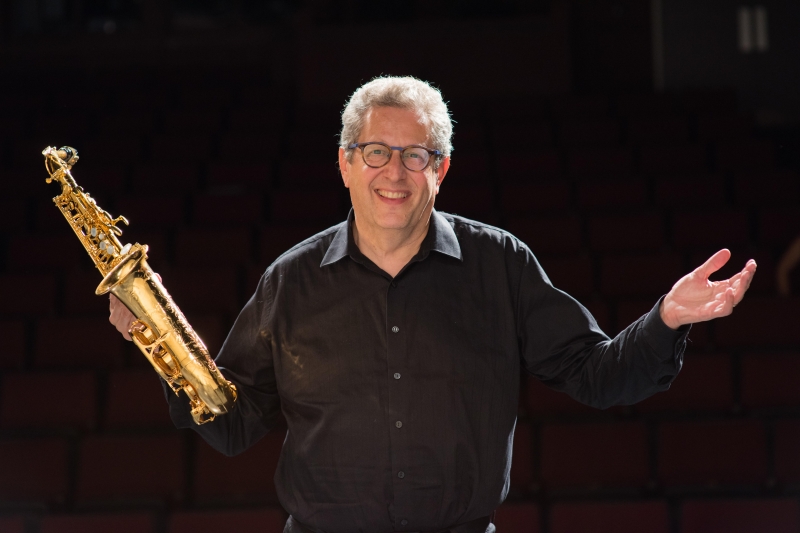 Saxophonist Kenneth Radnofsky has appeared as soloist with leading orchestras and ensembles throughout the world, including the Leipzig Gewandhaus Orchestra and New York Philharmonic under the direction of Maestro Kurt Masur (Debussy Rhapsody) , Dresden Staatskapelle, Boston Pops, Taipei and Taiwan Symphonies, New World Symphony, BBC Concert Orchestra, Oregon Symphony, Marlboro Festival, Portland String Quartet, and Moscow Autumn, a Russian new music festival. Mr. Radnofsky made his Carnegie Hall debut some years earlier with the NY premiere of Gunther Schuller’s Concerto with the Natl. Orchestral Assn. The world premiere of the Schuller was also given by Radnofsky, with the Pittsburgh Symphony, with both of the highly acclaimed performances conducted by the composer. David Amram’s Concerto, ‘Ode to Lord Buckley,’ is also dedicated to Radnofsky, who premiered the work with the Portland Symphony, under Bruce Hangen’s direction. He has also performed on numerous occasions for the Boston Symphony over the last 30 years. Other American composers commissioned by Radnofsky, have included Chris Theofanidis, Larry Bell, Donald Martino, Milton Babbitt, Ezra Sims, Roger Bourland, Michael Horvit, John McDonald, Allen Johnson and an innovative commission of Pulitzer Prize winning composer John Harbison for a Sonata, premiered Dec. 3, 1995 by 43 saxophonists in different locations around the globe in an effort organized by Radnofsky, entitled World-Wide Concurrent Premieres, Inc. (WWCP). Mr. Radnofsky is Founder of WWCP, and has created a network of musicians commissioning today’s finest composers. Vincent Plush ( Australia ), and Georgy Dmitriev ( Russia ) have also written for Radnofsky.

During the last few years, Kenneth Radnofsky has commissioned and premiered additional solo works by Schuller, Gandolfi, Yang Yong, David Amram, Michael Colgrass, Christian Yufra, Juan Ruiz, John McDonald, Armand Qualliotine, Jaime Fatas, Pasquale Tassone, Shih-Hui Chen, Andy Vores, Lei Liang, Jakov Jakoulov, Donald Martino, and Elliott Schwartz, all while celebrating over 30 years of teaching, with concerts in Rome, Taipei, Havana, Los Angeles, San Francisco, Boston, Mexico City, Montreal, Caracas, Manchester, UK, Beijing, Shanghai and elsewhere. His Radnofsky Saxophone Quartet performs the works of Schwartz, Wuorinen and Donatoni, as well as vintage saxophone works by Glazounov and Pierne. His new ‘Turina Trio,’ (Marco Granados, John McDonald and Radnofsky made its Jordan Hall debut in 2011, and may be heard playing multiple tracks on ‘KenRadnofsky’s YouTube Channel.’ 2011-12 included the premiere of James Yannatos’ Saxophone Concerto with the Longy Orchestra in Sanders Theatre, Baris Perker’s new Concerto with the Istanbul State Symphony in Turkey, Debussy Rhapsody with the Boston Conservatory Orchestra, and additional concerts as saxophonist for the Boston Symphony, Boston Ballet, and Rhode Island Philharmonic. 2010-11 included birthday concerts for Gunther Schuller(85) and David Amram(80) as soloist at Seiji Ozawa Hall at Tanglewood with the BUTI Wind Ensemble, El Paso Symphony, and Boston’s historic Jordan Hall, all with the composer(s) in attendance, in works specifically written for Radnofsky. Radnofsky was also featured playing Bach’s 2nd Brandenburg Concerto with the Boston Classical Orchestra and Betty Olivero’s Concerto ‘Kri’ot,’ with the Jerusalem Symphony, during the 2010-11 concert season, with additional concerts with the Boston Symphony and Philadelphia Orchestra. 2009 included a Boston premiere of the original orchestration of Aaron Copland’s Quiet City (saxophone, clarinet, trumpet and piano). 2008 included the premieres of new works written for Radnofsky by Israeli composers Gil Shohat and Betty Olivero (commissioned by David Keidan, for Harvard Judaica, in honor of the 6oth Anniversary of the State of Israel), with performances at Harvard, with the Portland String Quartet, Boston Modern Orchestra Project, and a performance at Tanglewood as soloist with John Williams and the Boston Symphony in Franz Waxman’s Suite for Saxophone, ‘A Place in the Sun,’ Concurrent with his performing and 60 hour teaching week, Radnofsky has designed and implemented a saxophone program for Venezuela over the last 10 years; (he returned in 2011), and in the summer of 2010 began teaching in Brazil. Radnofsky is committed to outreach on an international scale, nationally and locally; his editorial on such was published in the Christian Science Monitor. Radnofsky has given literally thousands of outreach performances. They include a teaching component and investment in community to which he is deeply committed.