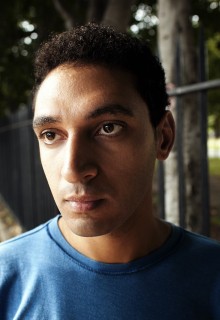 Mohammed Fairouz, born in 1985, is one of the most frequently performed, commissioned, and recorded composers of his generation. Hailed by the New York Times as “an important new artistic voice” and by BBC World News as “one of the most talented composers of his generation,”Fairouz melds Middle-Eastern modes and Western structures to deeply expressive effect. His large-scale works, including four symphonies and an opera, engage major geopolitical and philosophical themes with persuasive craft and a marked seriousness of purpose. His solo and chamber music attains an “intoxicating intimacy,” according to New York’s WQXR, which selected his Critical Models as Album of the Week.

A truly cosmopolitan voice, Fairouz had a transatlantic upbringing. By his early teens, the Arab-American composer had traveled across five continents, immersing himself in the musical life of his surroundings.

Since childhood, Fairouz has found musical inspiration in literary and philosophical sources. The composer has described himself in Poets and Writers magazine as“obsessed with text.” His first attempt at composition, at age seven, was an Oscar Wilde setting; since then, he has composed an opera, thirteen song cycles, and hundreds of art songs. He has been recognized by New Yorker magazine as an“expert in vocal writing,” while Gramophone has called him a “post-millennial Schubert.” He has collaborated directly with several distinguished poets, including Mahmoud Darwish, Wayne Koestenbaum, and Nobel Prize-winner Seamus Heaney. Among the eminent singers that have promoted his wealth of vocal music are Kate Lindsey, Sasha Cooke, Lucy Shelton, D’Anna Fortunato, Mellissa Hughes, David Kravitz and Randall Scarlata.

His music has been performed at Carnegie Hall (all three auditoriums), Lincoln Center, Boston’s Symphony Hall, The Kennedy Center, and throughout the United States, the Middle East, Europe, and Australia. It is also heard in “downtown” New York venues such as Le Poisson Rouge, Issue Project Room, Roulette, and Galapagos. Recordings are available on the Naxos, Bridge, Dorian Sono Luminus, Cedille, Albany, GM/Living Archive, and GPR labels.

As an artist involved with major social issues, Fairouz seeks to promote cultural communication and understanding. States the composer, “There’s an old saying: where words fail, music begins. I would almost say, where politicians have failed, artists might succeed.” His third symphony, Poems and Prayers for mezzo-soprano, baritone, chorus, and orchestra, interweaves texts of Arab poets Fadwa Tuqan and Mahmoud Darwish, the Israeli poet Yehuda Amichai, and prayers such as the Aramaic Kaddish. His fourth and latest symphony is In the Shadow of No Towers for wind ensemble. It is inspired by Pulitzer Prize-winning graphic novelist Art Spiegelman’s book of the same title about American life in the aftermath of 9/11. The work will premiere on March 26, 2013 in Carnegie Hall’s Stern Auditorium, and is being recorded for a release on Naxos.

Fairouz’s first opera, Sumeida’s Song, is based on a based on the play Song of Death by the Egyptian playwright Tawfiq al-Hakim. The opera follows the protagonist Alwan’s attempts to bring modernity to darkness and break a never-ending cycle of violence, with grave consequences for Alwan. Sumeida’s Song was performed in concert in Carnegie Hall’s Zankel Hall, and a recording will be released on Bridge Records in October 2012. Its premiere staging will take place at the Prototype festival of new opera-theater works, held in January 2013 at HERE Arts Center in NYC.

Mohammed Fairouz was chosen by the BBC to be a featured artist for the television series Collaboration Culture, which will air globally on BBC World Service TV (viewership approximately 70 million). As part of the program, which includes an in-depth profile of the composer, Fairouz developed and unveiled an entirely new dance work, Hindustani Dabkeh, featuring David Krakauer, the American String Quartet and Bollywood star Shakti Mohan.

Fairouz has been heard in interviews on nationally syndicated shows such as NPR’s All Things Considered, BBC/PRI’s The World, and The Bob Edwards Show. He has been profiled in Symphony Magazine, Strings Magazine, New Music Box, and the Houston Chronicle, and featured as part of a special segment on Sirius-XM’s Symphony Hall channel.

His principal teachers in composition have included György Ligeti, Gunther Schuller, and Richard Danielpour, with studies at the Curtis Institute and New England Conservatory. Honors and awards include the prestigious Tourjee Alumni Award from the New England Conservatory, the Malcolm Morse Memorial Award, and the NEC Honors award, among others. In 2008 he was honored with a national citation from the Embassy of the U.A.E. in Washington D.C. for outstanding achievement in artistry and scholarship. Fairouz has been invited to lecture and lead residencies across the country at institutions such as Columbia University, Brown University, Chestnut Hill College, Grinnell College, Humbolt State University and the University of Western Michigan. He has served on the faculty at Northeastern University in Boston and several summer festivals, including SongFest and the Imani Winds Chamber Music Festival at The Juilliard School.

His works are published by Peermusic Classical. He lives in New York City.