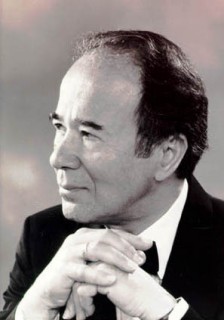 James Yannatos was Music Director of the Harvard-Radcliffe Orchestra from 1964 until his retirement in 2009. Known as “Dr. Y” to his students, his joyful, loving presence touched thousands of young lives. Under his leadership, the orchestra toured to Europe, Russia, South America, and Asia. He also organized and co-directed the New England Composers Orchestra, the Tanglewood Young Artists Orchestra, and taught conducting at Tanglewood and also at Harvard University. He has appeared as guest conductor-composer at the Aspen, Banff, Tanglewood, Chautauqua, and Saratoga Festivals, and with the Boston Pops, Winnipeg, Edmonton, Baltimore, and San Antonio Symphonies and the Sverdlovsk, Leningrad, Cleveland, and American Symphony Chamber Orchestras. Born March 13, 1929, and educated in New York City, he attended the High School of Music and Art and the Manhattan School of Music. Subsequent studies with Nadia Boulanger, Luigi Dallapiccola, Darius Milhaud, Paul Hindemith, and Philip Bezanson in composition, William Steinberg and Leonard Bernstein in conducting, and Hugo Kortschak and Ivan Galamian on violin took Yannatos to Yale University (B.M., M.M.), the University of Iowa (Ph.D.), Aspen, Tanglewood, and Paris. As a young violinist, he performed in various professional ensembles including a piano trio, string quartet, early music groups with Hindemith and Boulanger, and in the Casals Festival. As a composer, James Yannatos has received commissions for orchestral, vocal, and instrumental works which include Cycles (recorded by Collage), Sounds of Desolation and Joy (Lucy Shelton), Concerto for Bass and Orchestra (Alea III and Edwin Barker),Concerto for String Quartet and Orchestra (Mendelssohn String Quartet followed by the Chiara String Quartet), Suite for Solo Horn(Erik Ruske), Symphonies Sacred and Secular: Prais'd be the Fathomless Universe (combined Harvard Choruses and Harvard-Radcliffe Orchestra), and Songs of Life, Love and Loss (Peggy Pearson/Boston Modern Orchestra Project). His most ambitious work, Trinity Mass(for soloists, chorus and orchestra), premiered in Cambridge at Sanders Theater and New York at the Cathedral of St. John the Divine to great acclaim (Jason Robards, narrator), and was aired on National Public Radio in 1986. His Symphony No. 3 for Strings: Prisms and Symphony No. 5 Son et Lumierewere premiered in the former USSR by the Lithuanian State Orchestra and the Leningrad Chamber Orchestra in 1990 and 1992. Ritual Images was performed by the Seattle Symphony (conducted by Gerard Schwartz) in 2010. Two weeks before his death, he attended performances of his opera buffa, Rockets Red Blare, rewritten in 2008, at the Agassiz Theatre in Cambridge, MA. His most recently completed work, Concerto for Alto Saxophone and Orchestra will be performed by Ken Radnofsky and the Longy Conservatory Orchestra under the baton of Julian Pellicano at Sanders Theater in February, 2012 and at Bard College in April, 2012.